I tend to buy a lot of tent pegs because I am always making new tents/tarps and I like to have them all complete against need. I have found Aliexpress to be a good source (if you can wait for delivery). The ‘Tito’ brand there is quite satisfactory, for example.

I favour a Shepherd’s hook shape for most of my tent pegs in titanium (for lightness) and around 6″ long for most uses. The plain ones are usually the cheapest/lightest but a bit of colour on them does help to prevent their loss. Of curse you can always dip the heads in some paint and wait for them to dry.

It is a good idea to always put pegs in the ground and take them out in the same order (placing them immediately in a pocket/bag) and to always count them as you do. Always go over the last night’s camp-site with a fine toothed comb before you quit it as there is often some small item you missed/forgot – such as a tent peg.

There is a right (and many wrong) way/s to ‘plant’ tent stakes. First you should realise that (normally) there are two forces acting on a tent stake. (Looking towards the tent) there is a horizontal force in that direction plus a vertical force upwards on it. The vortex of these two forces is exactly half the angle they make to each other. In this case that would be 45 degrees to the horizontal in the direction of the tent (and upwards).

The tent peg should be placed in the ground at 90 degrees to the direction of that vortex of force (and obviously downwards). People often place them too vertically or too horizontally. In practice the peg will usuallybe placed at 90 degrees to the guy line which should (usually) represent the angle of that vortex (if the tent is designed properly – but many are not).

The further into the ground the peg is driven the better ‘purchase ‘ it will have – and of course if it has a flat side that should be on the side towards the tent so it will compress the ground as much as possible.

Of course you must ensure you have some means of extracting them again without bending (a piece of strong cord is good for this – or an inverted peg). You need to pull them out (and drive them) in a straight line (rather than move in it).

The shepherd’s hook pegs have a ‘tail’ (notice how the very end starts to bend outwards again?) which should be firmly in the ground so the peg does not turn (and the guy slip off). This also helps to secure it.

The ‘J’ stakes can have an added loop of cord tied to them (with a simple overhand knot) so that they can be driven quite underneath the ground for better purchase (as shown). You can attach a carabiner to this loop for easy threading of the guys, but it is not so hard to tie and untie the single overhand knot on the end of the micro clam cleat which is the very best ultralight tensioner.

You can secure the guys more by going around the peg twice. If it going to be windy this is a good idea.

If it is very windy it is a good idea to have a short length of guy line (with its own tensioner) that extends outwards from each peg and which culminates in yet another peg. This second peg ‘anchors’ the first line of pegs preventing them from either lifting or moving horizontally. You can usually use small branches for this second line of pegs if you already have the guy lines on your tents. I always have this second set of guys on my tents (it probably only amounts to 2- 5 grams at most for the whole tent) as I have many times found myself in very windy conditions which would have had the first set of pegs out and the tent away in the air – in the Victorian Alps or down in the ‘Roaring Forties’ on the South and West Coast of Tasmania for example.

I have recently bought a heap of shepherd’s crook type stakes and some j-stake types from Aliexpress. I will give you the links but often you will end up buying from a slightly different link there. 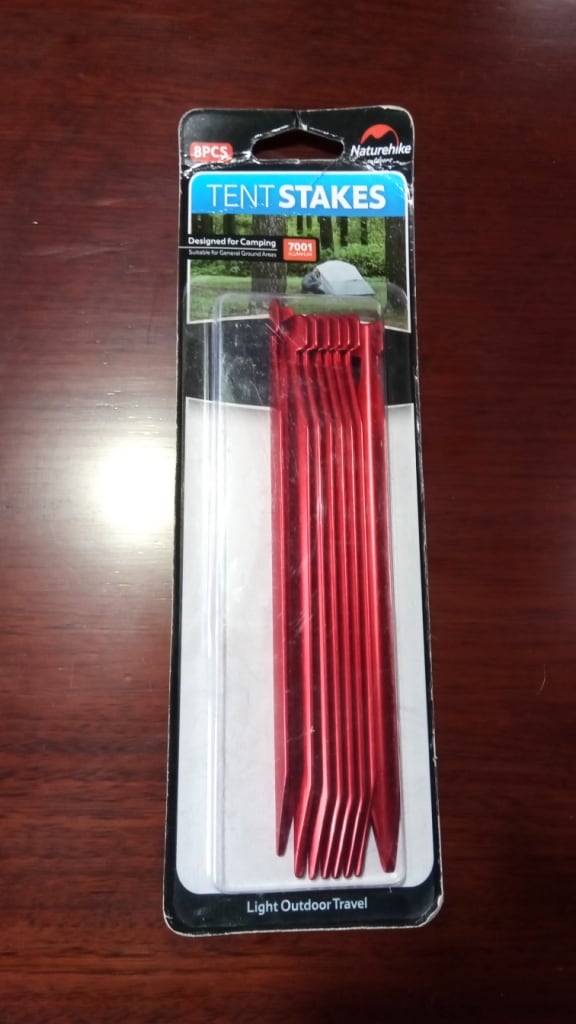 These ones cost around US $1 each in packs of 8. 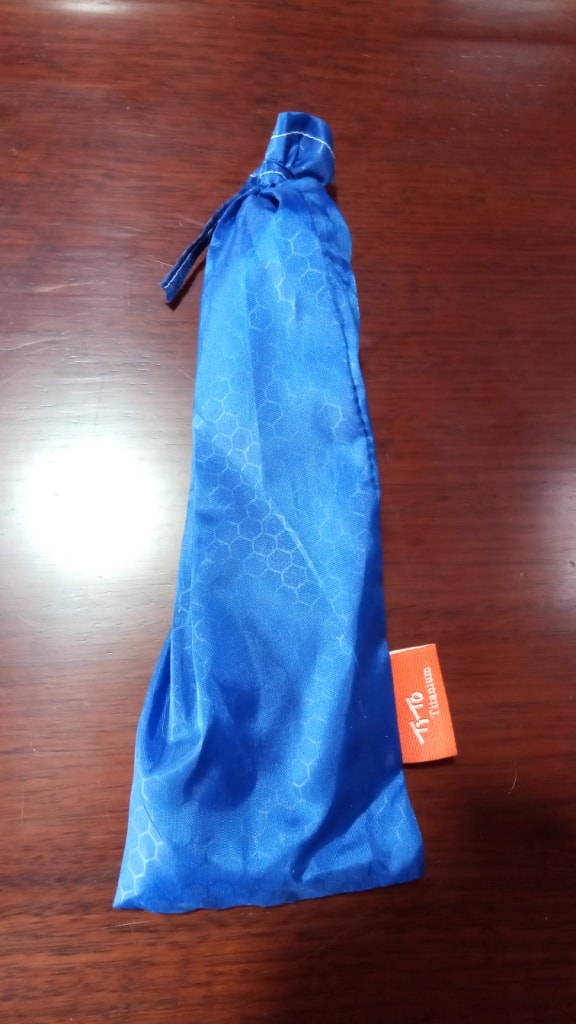 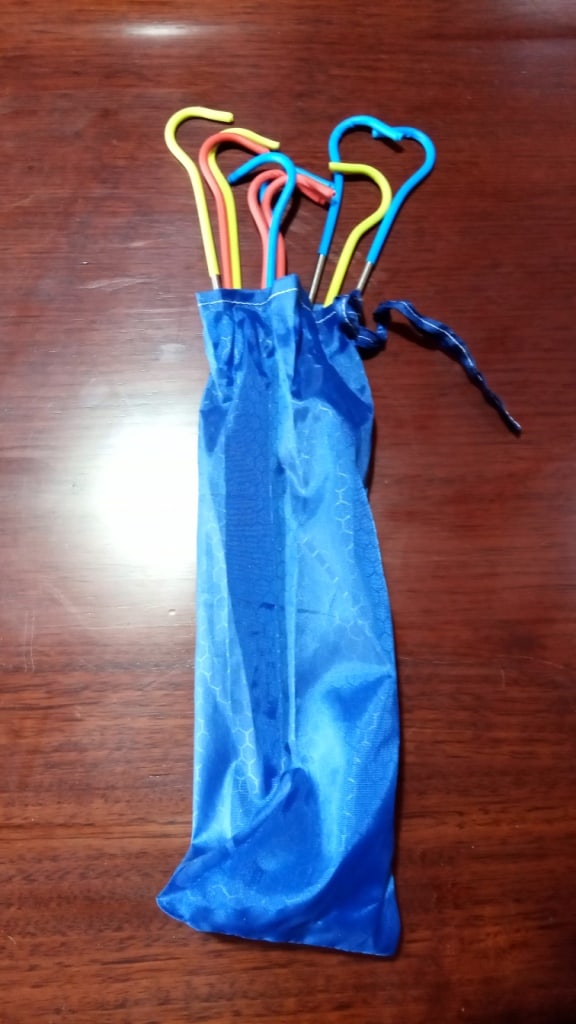 These ones also cost around US$1 each in packs of ten.

The Shepherd’s hook ones weighed 6.3 grams each and the J stakes and 9.6 grams each. They are both fine quality. I find these J stakes to have superior holding ability to the X- shaped stakes at a very much reduced weight. They are quite resistant to bending (if treated sensibly)

This is how you attach the cord to the J-stake. 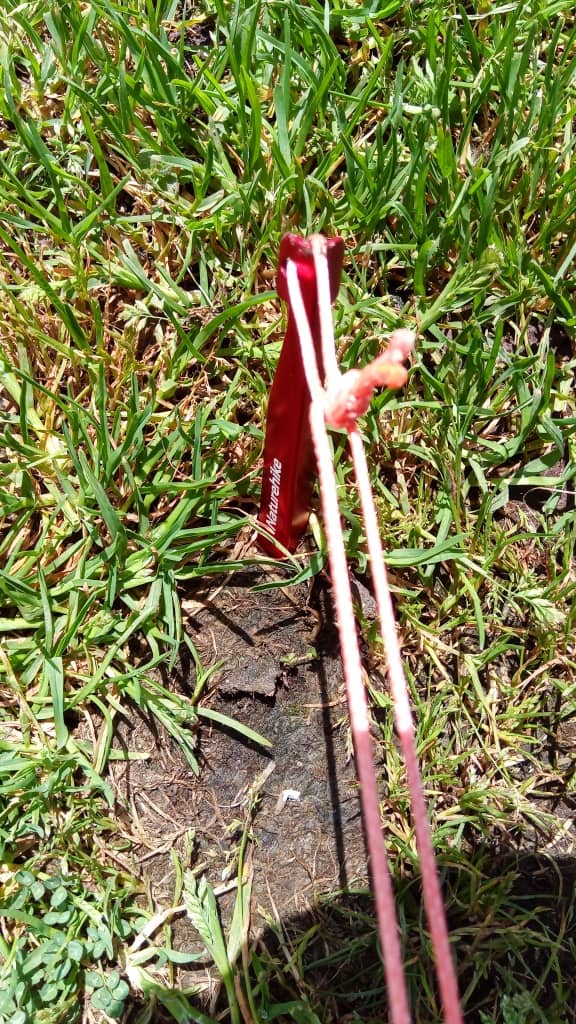 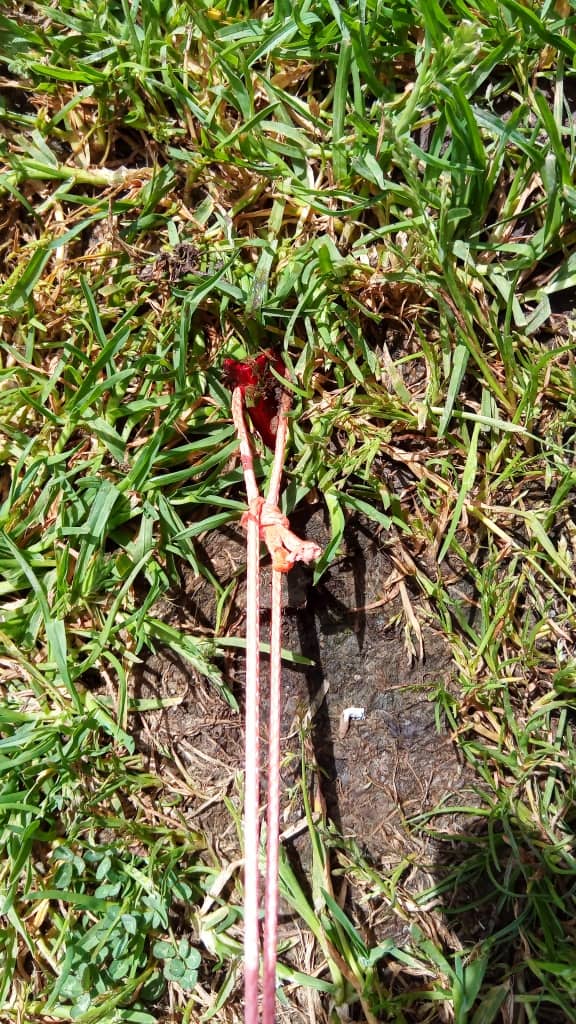 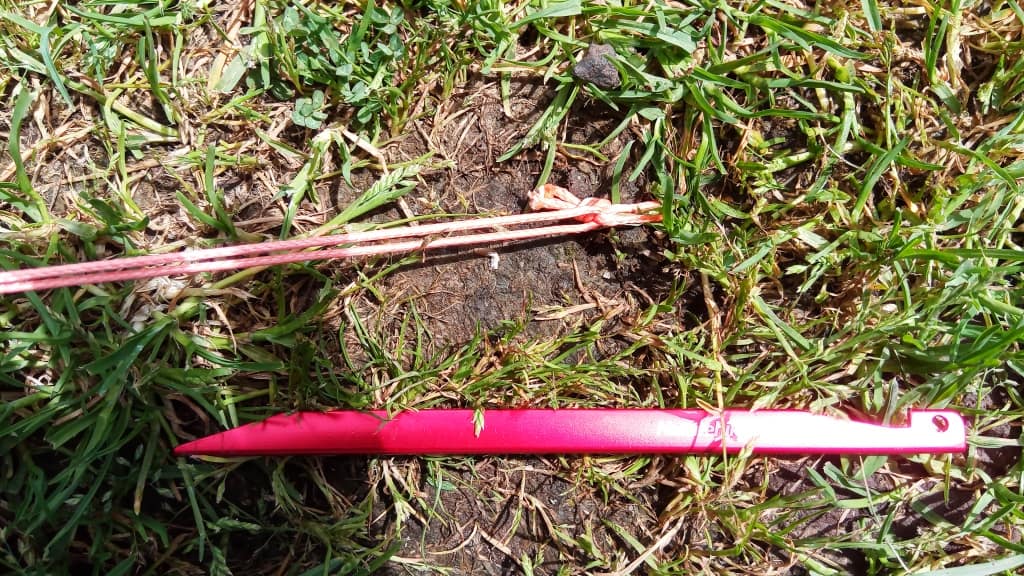 If you do’t attach a loop you pass the guy around here,

And drive it down until the cord touches the ground. Note the angle. 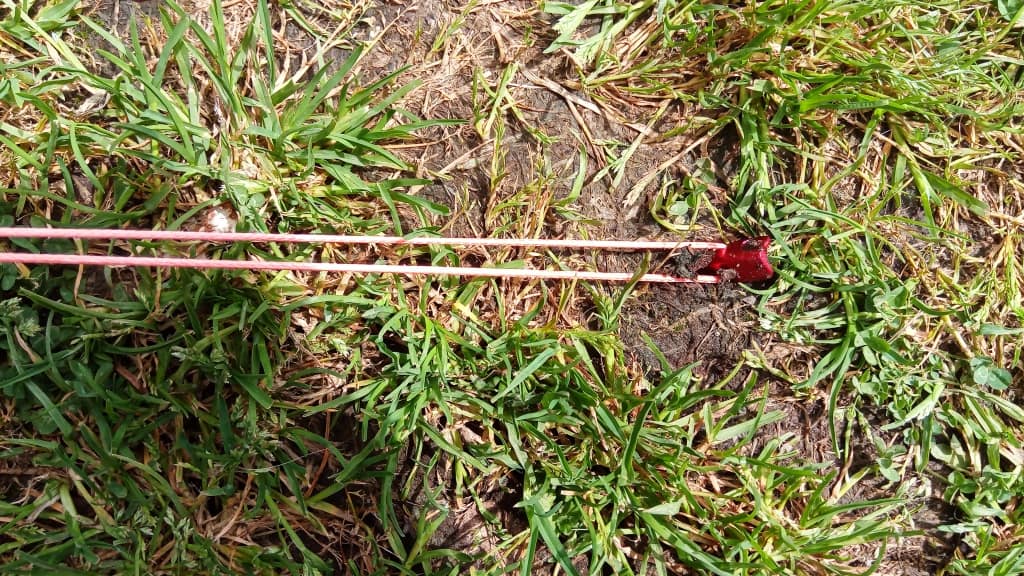 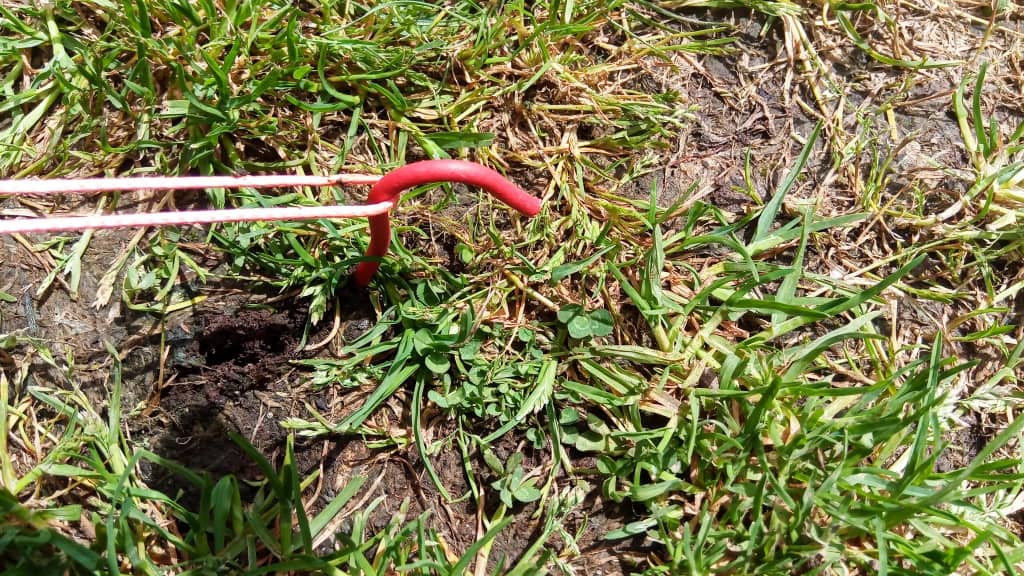 Should be driven right into the ground like this. 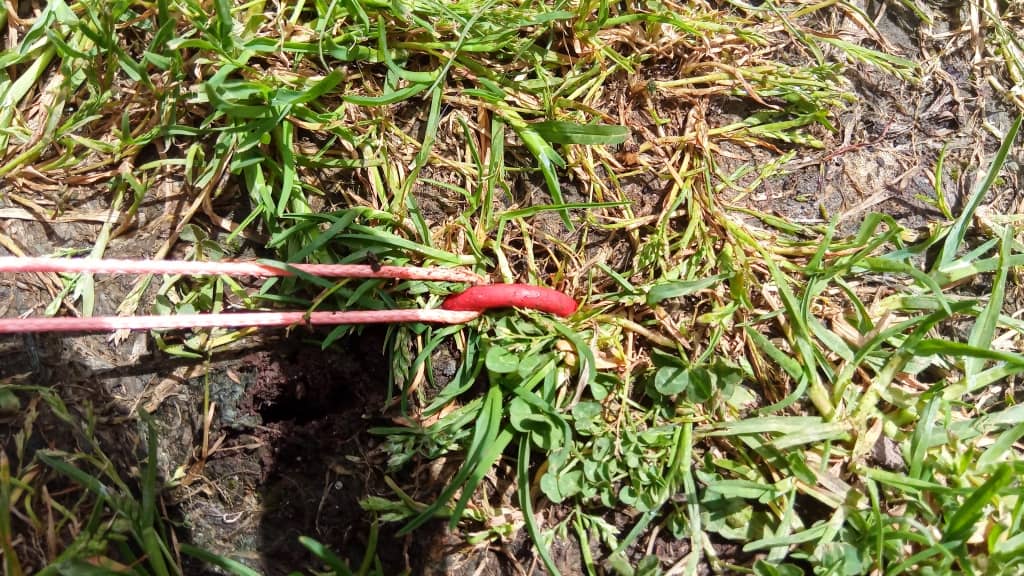 PS: That is (approx) 2 mm dyneema cord I am using for guys. Nothing is stronger for the weight.

The Perfect Guy Line for a Tent or Tarp

Other uses for tent stakes: