The track follows the true right bank (ie facing downstream) of the Tyers river until it crosses on an old pipeline. There are numerous spots where you could stop for a picnic, overnight or for a fish. The impressive cliffs below Peterson’s lookout are a feature. Birdlife, wildlife and wild flowers abound. There are a number of side tracks which can be explored. Keep your eye out for signs of the old pipelines one of which was made of wood! 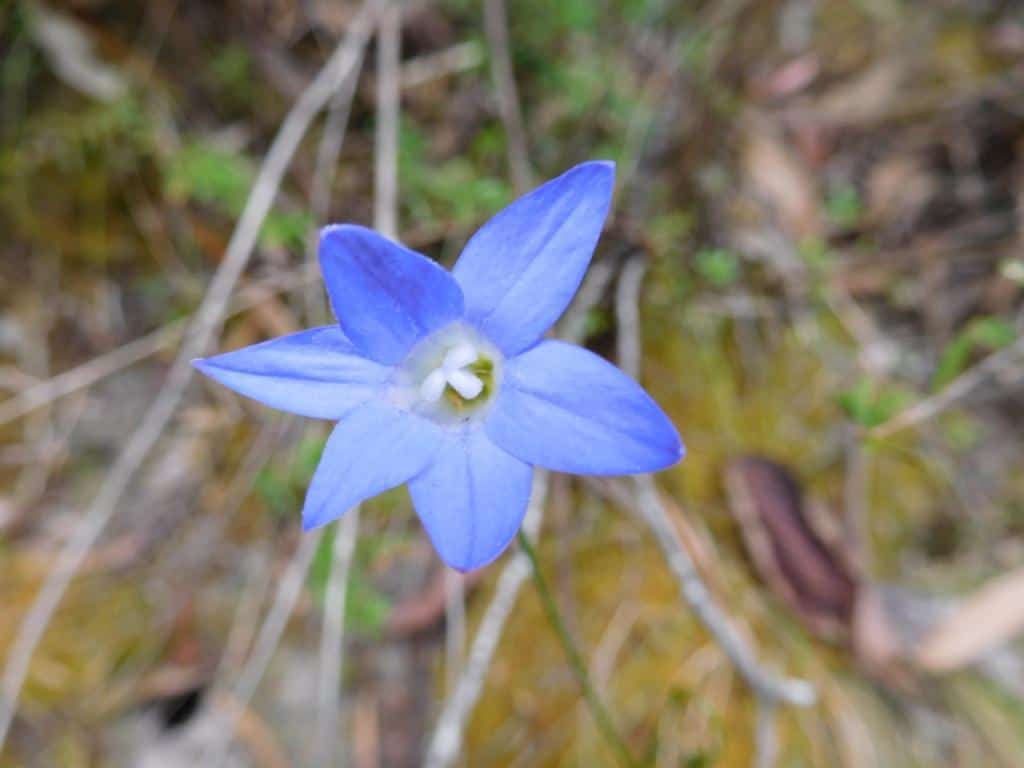 There are many beautiful wildflowers. 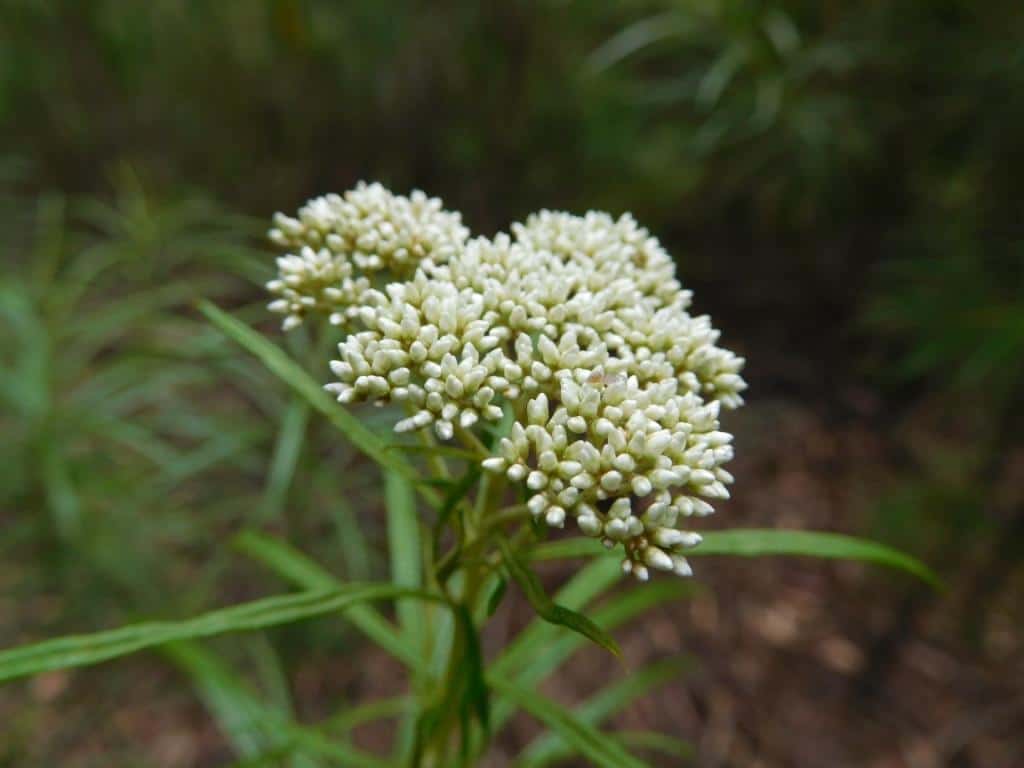 I usually don’t like dogwood, but it has its beauties… 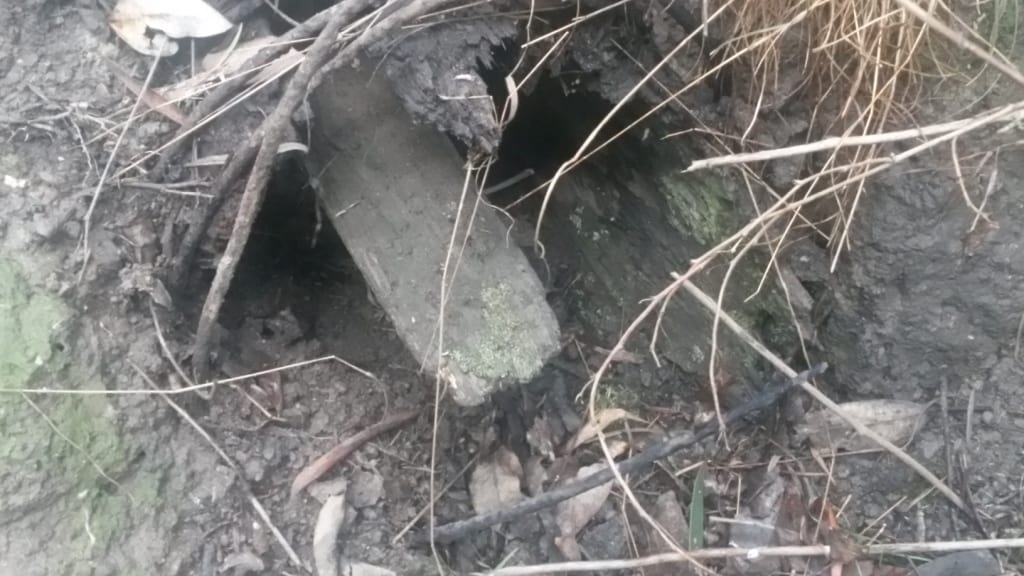 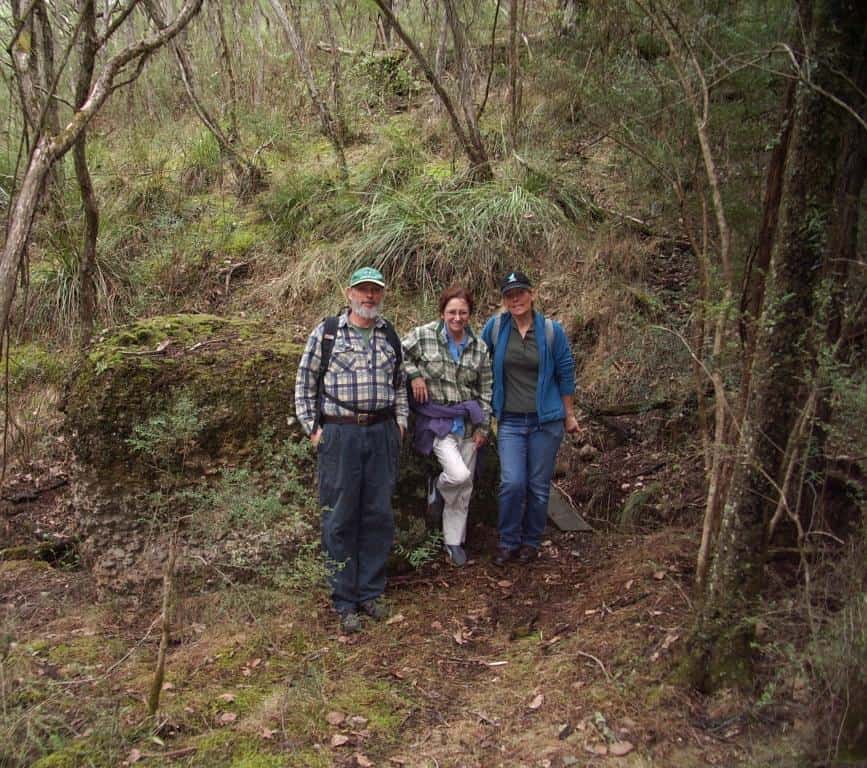 Giant Tor along the way: wouldn’t have want to be around when the Titans were playing marbles with these guys! 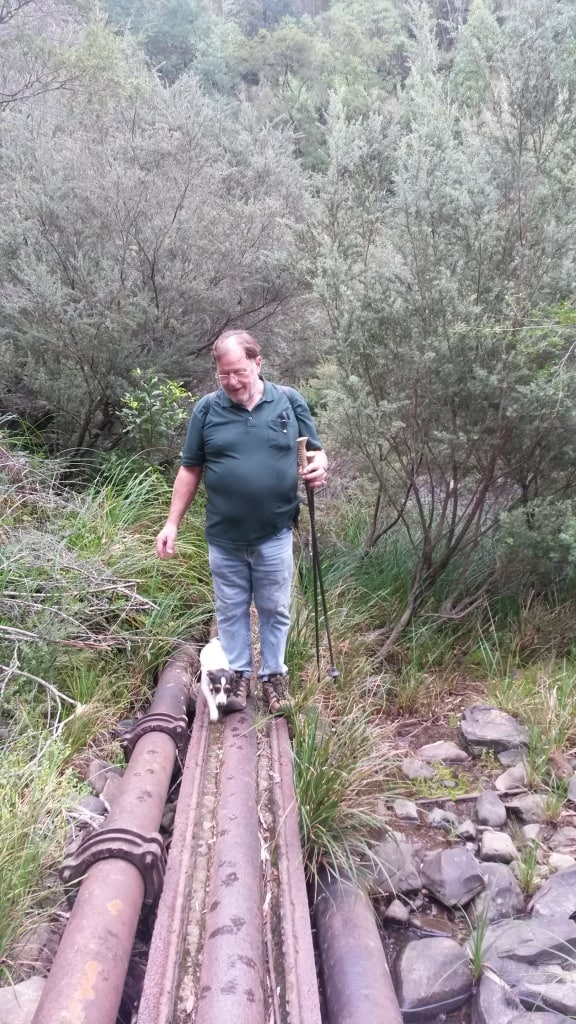 Park notes: ‘The open forests are dominated by Yertchuk and Silvertop, with an understorey of wattles, tea trees, sedges and grasses. Along the ridges, an open forest of Silvertop and an understorey of Variable Sallow Wattle, Prickly Tea-tree, Bushy Needlewood and Common Heath flourish. Red Box and Apple Box thrive on the steep rocky slopes neighbouring Tyers Gorge. The park hosts over 30 species of orchid and a number of rare plants. Colourful wildflowers in spring feature Correas, Bush peas, Guineaflowers and wattles. Birdlife is found in abundance including Superb Lyrebirds, Yellow-tufted Honeyeaters, Rose Robins, Thornbills, Boobook Owls and Peregrine Falcons. Gippsland Water Dragons can often be seen basking in the sun on rocks along the Tyers River. The park is also home to the Common Wombat, Swamp Wallaby, Common Ringtail Possum, Sugar Glider, Short-beaked Echidna and Brown Antechinus.’ 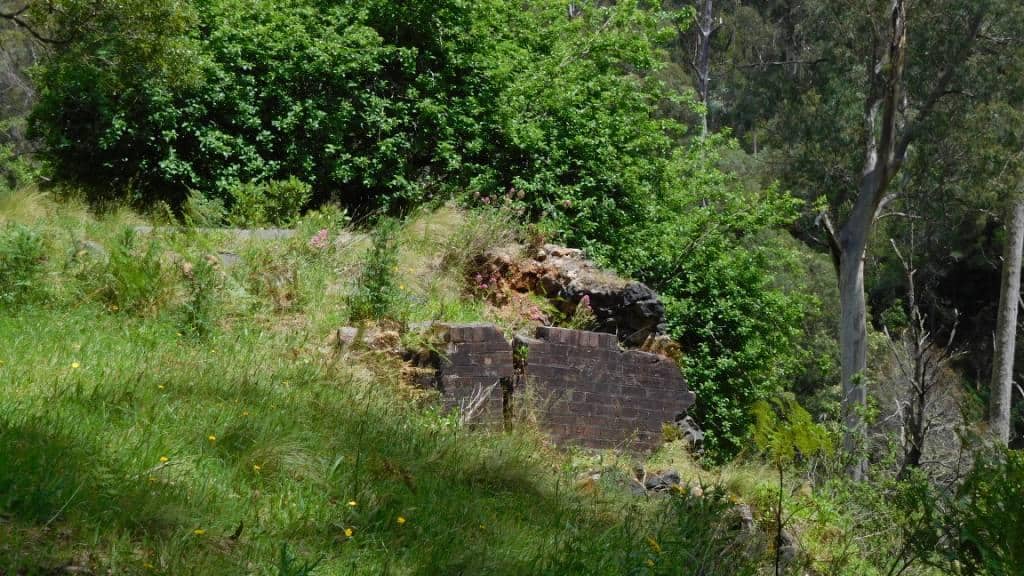 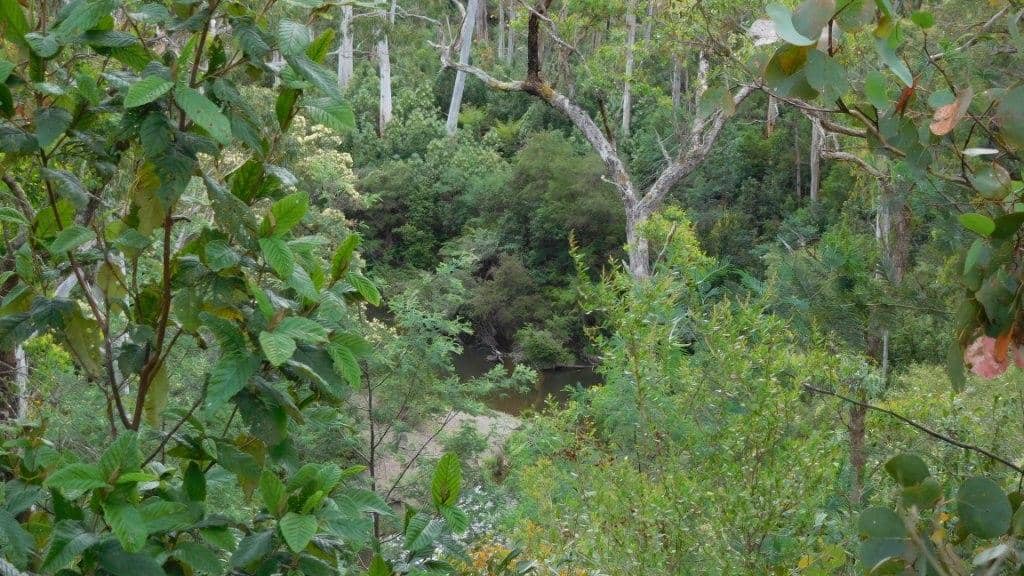 Frequent glimpses of the river. 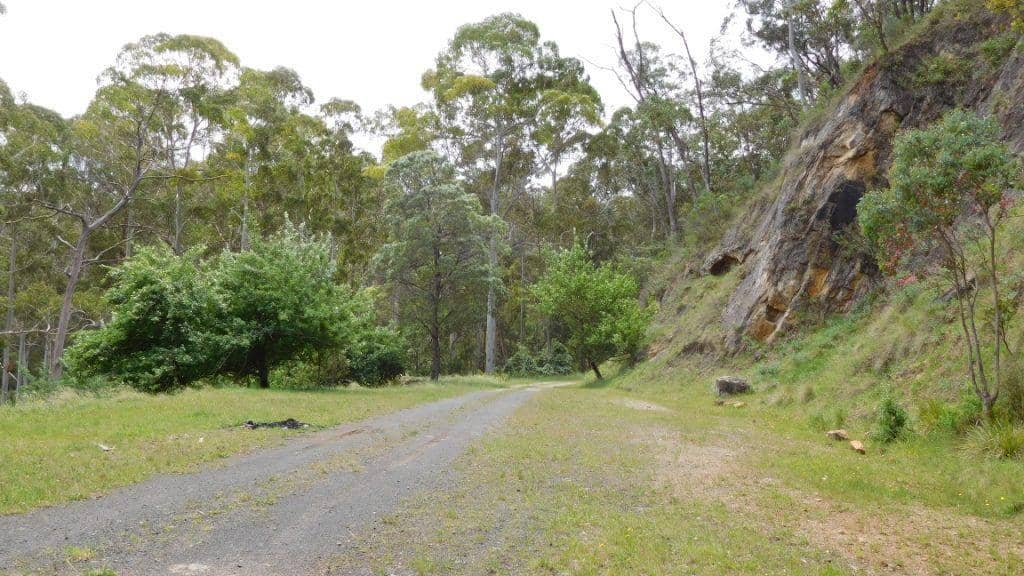 It is approximately 2- 2.5 hours to two splendid camps on the W3 track. The first may need you to carry water 15 minutes from the pipeline crossing point (sometimes just under water) just below the W3. At the second camp where the old limestone kilns and some ancient apple trees can still be seen, water can easily be obtained from the river (100 metres). The cliff face opposite the kilns is popular for rock climbing practice. Don’t! An alternative more private camp can be found earlier by turning towards and passing through the locked gate when you hit the W3 track, approx a further 1km along past it. Water is available from the river. There are many miles of locked roads in the Tyers State Park which you can walk along. This one will take you across a bridge over the Tyers, past Connan Scout camp (water) and link up again with the W12 track. 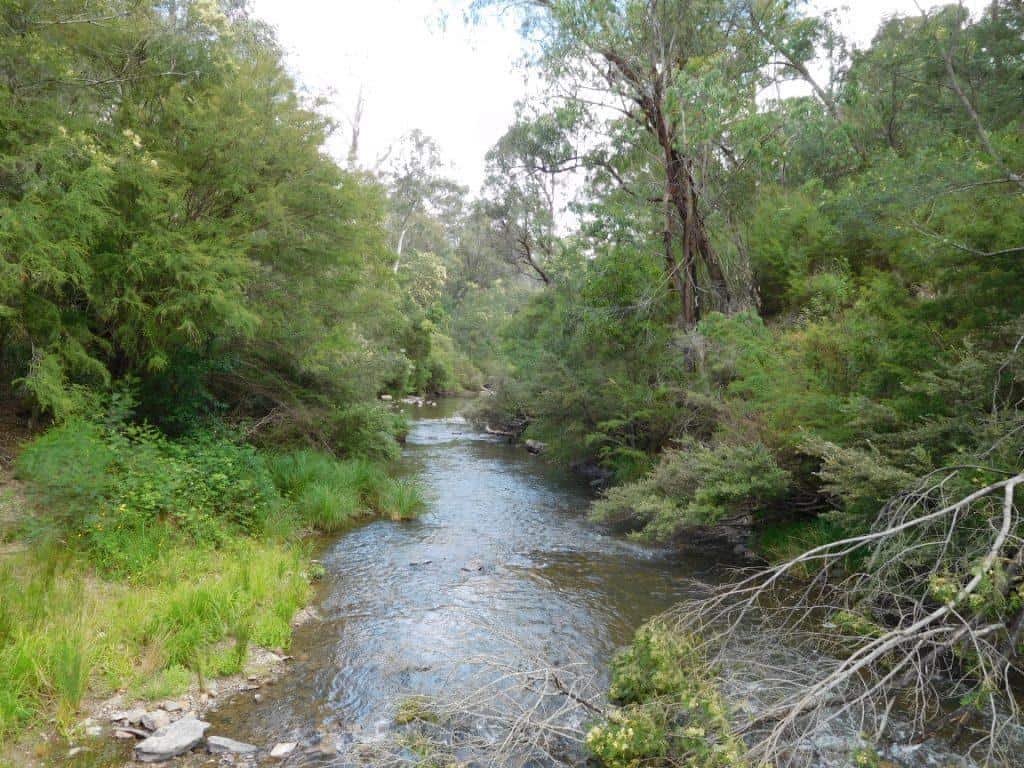 It is a lovely little river. 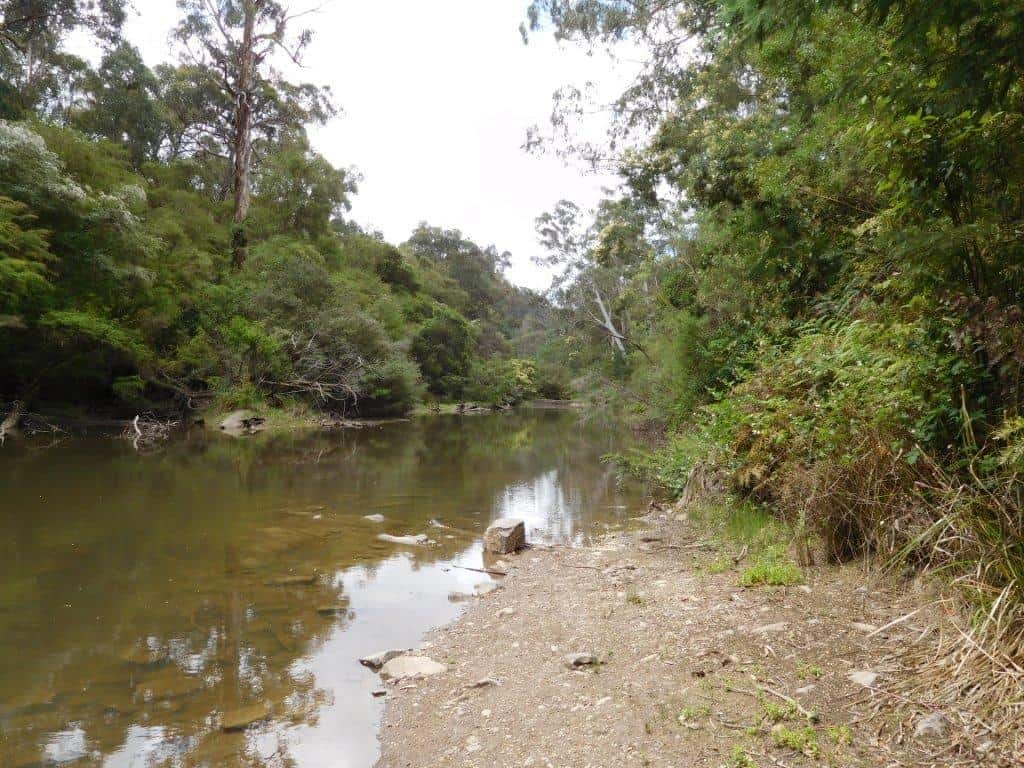 So many pretty stretches.

The track descends from the W3 to Whites creek (water) then contours through fern groves until it meets a 4WD track which joins the W12. You follow the W12 downhill to the river. There is a camp 45 minutes along the track from the W3 just off the W12 track .5 km South of the bridge Just before you get to it you may notice another old picturesque water supply weir in the river. From the W12 track it is approx 2 hours to the W18 track (Moondarra). 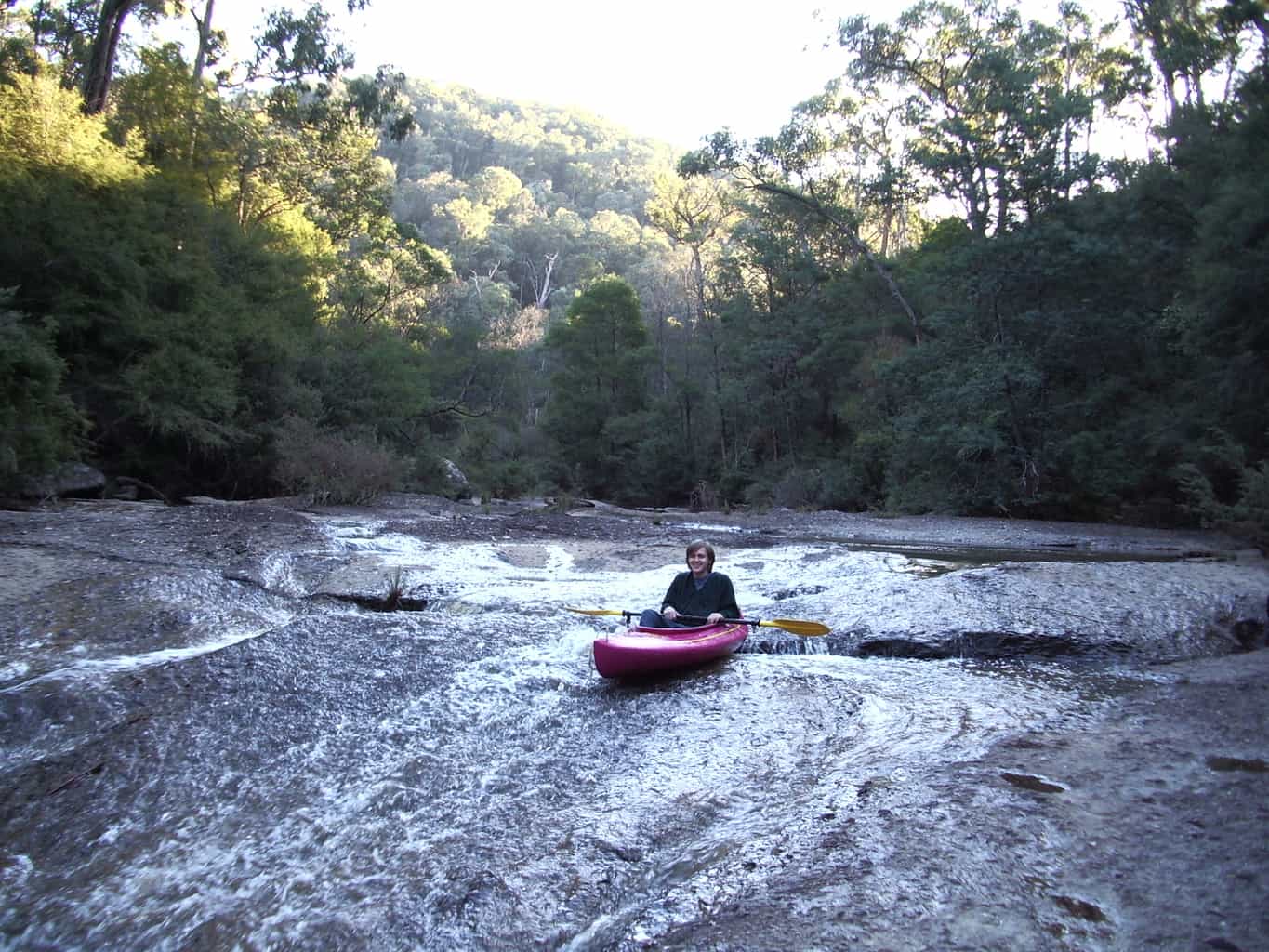 The river is canoeable, but some places you can get stuck.

The river is canoeable for a very long way…You can probably start at Christmas Creek on the Western Tyers (certainly just below Growler’s Track – I have) and canoe all the way to Wirilda. Many days. Unfortunately there are many logs and other obstacles you will have to contend with. If these were cleared it would be a wonderful trip. Clearly you can put in at the W3 track (4-5 hours paddling) or the W12 track (better to take two days) exiting at Wirilda. The river is suitable for packrafting due to the many walking/cycling tracks which give access. 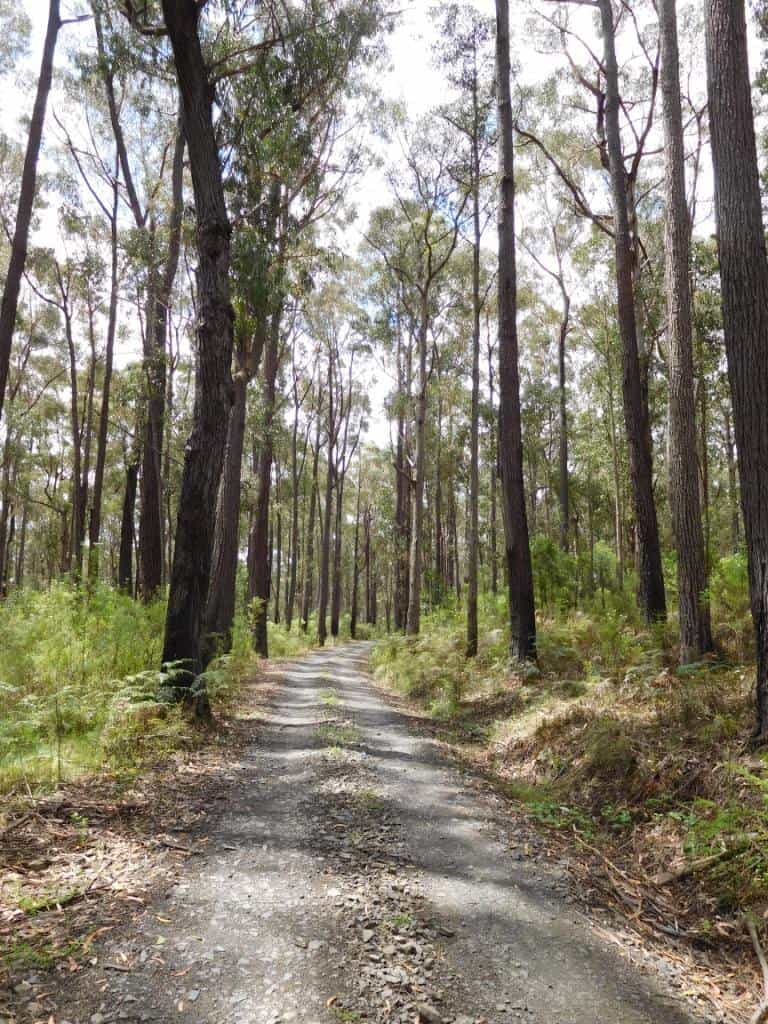 A diverse range of different trees. 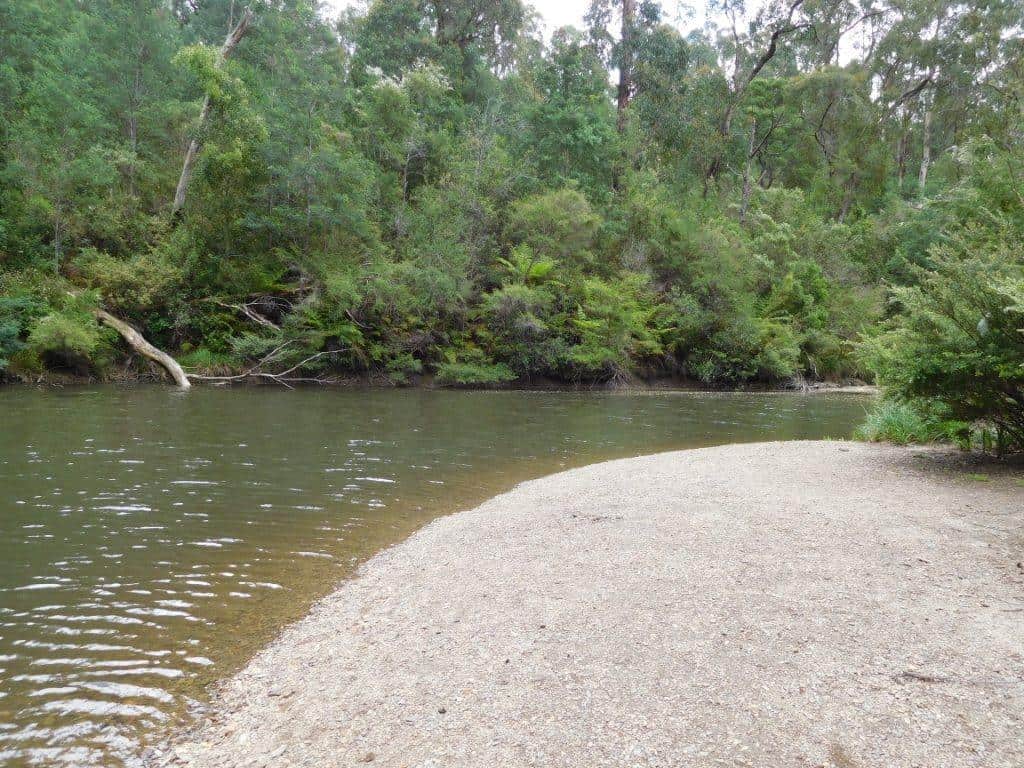 Camping on the many sandbars is an option. 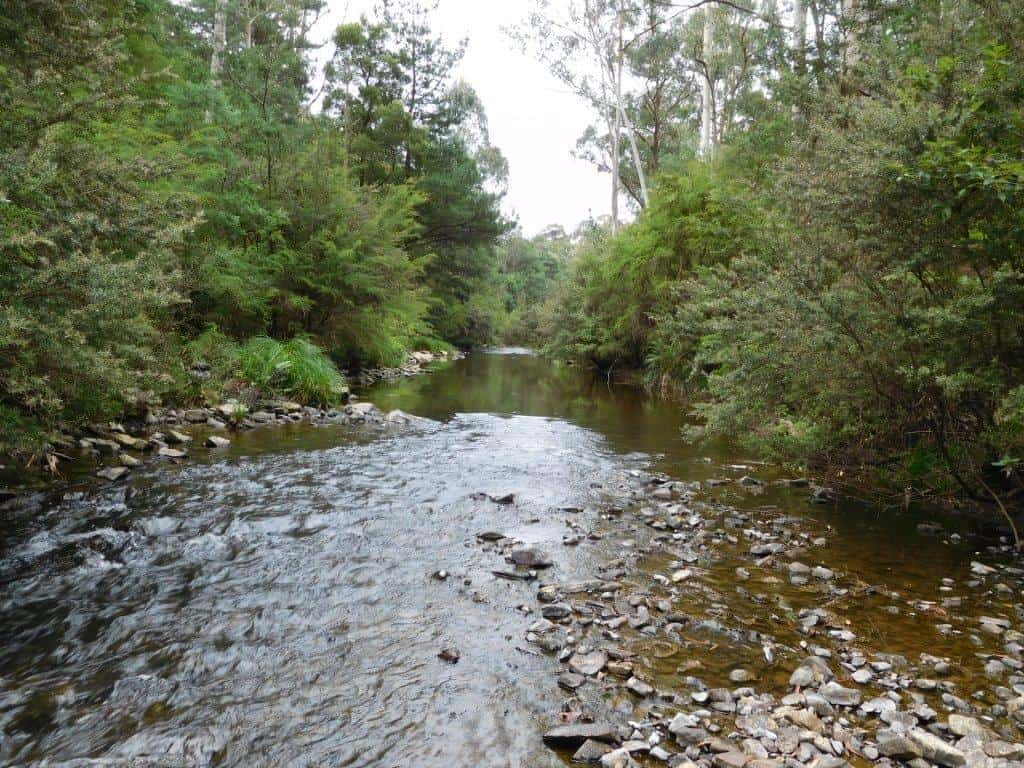 The trout were rising here: fresh fish for supper!

After you leave the W12 the track crosses a minor stream (water) then zig zags upwards away from the river until it meets a 4WD track (the W18.2) which it follows for about a km, then it descends fairly steeply to the river once more. The track follows the river for the last kilometre or so and is mostly only 10-20 metres from it. You can be looking out for a spot along here to put up a small tent (even in the middle of the track would be fine); lots of spots. You can camp just before the Moondarra end of the track., just before the spillway viewing area (keep an eye out for it) , or near the bridge over the small stream about 200 metres from the W18 Track. The next good camp with water is about 3 hours further on… 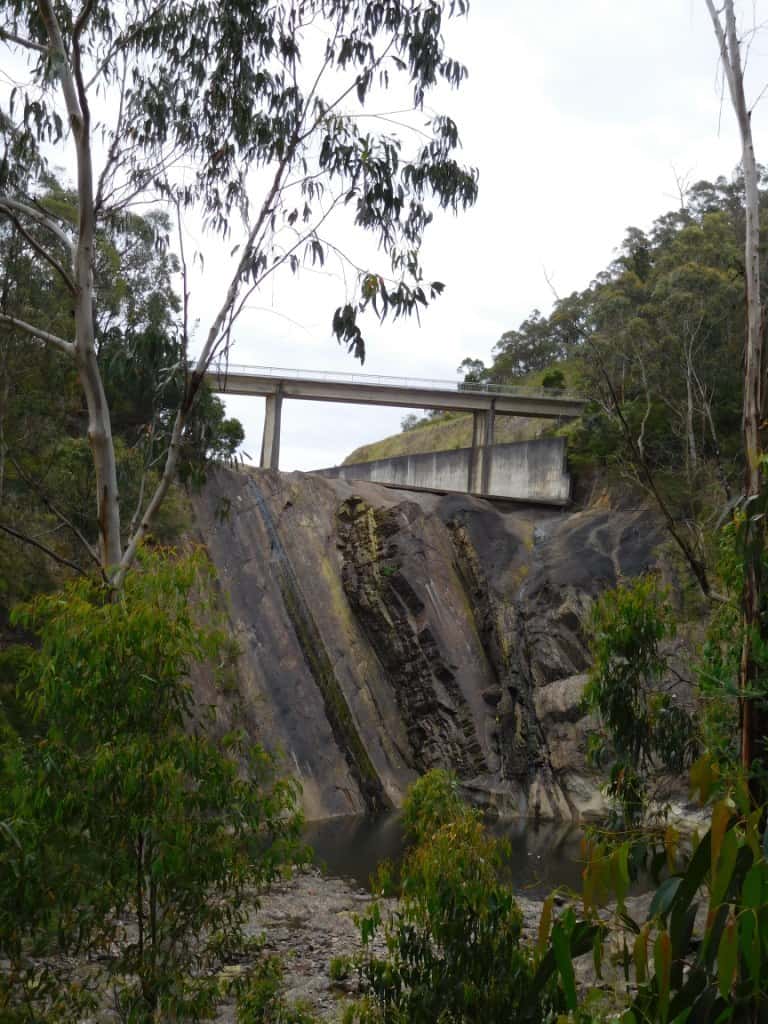 Spillway from viewing area approx 300 metres from the end of this section. 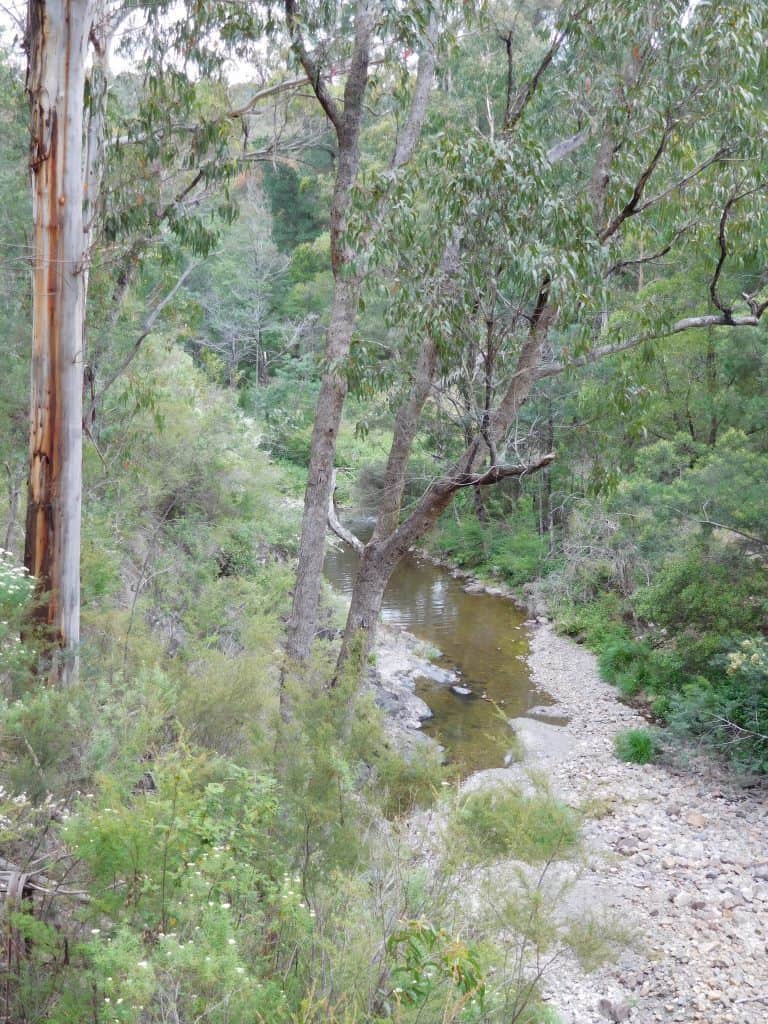 When you come out onto the W18 track (which crosses the dam wall .5 km to your West – great views of the lake) you can also walk up to the gardens and recreation grounds a further 1 km beyond the dam viewing area where there is water and toilets and lot of mown grassy flats, as there is below the dam wall as well. 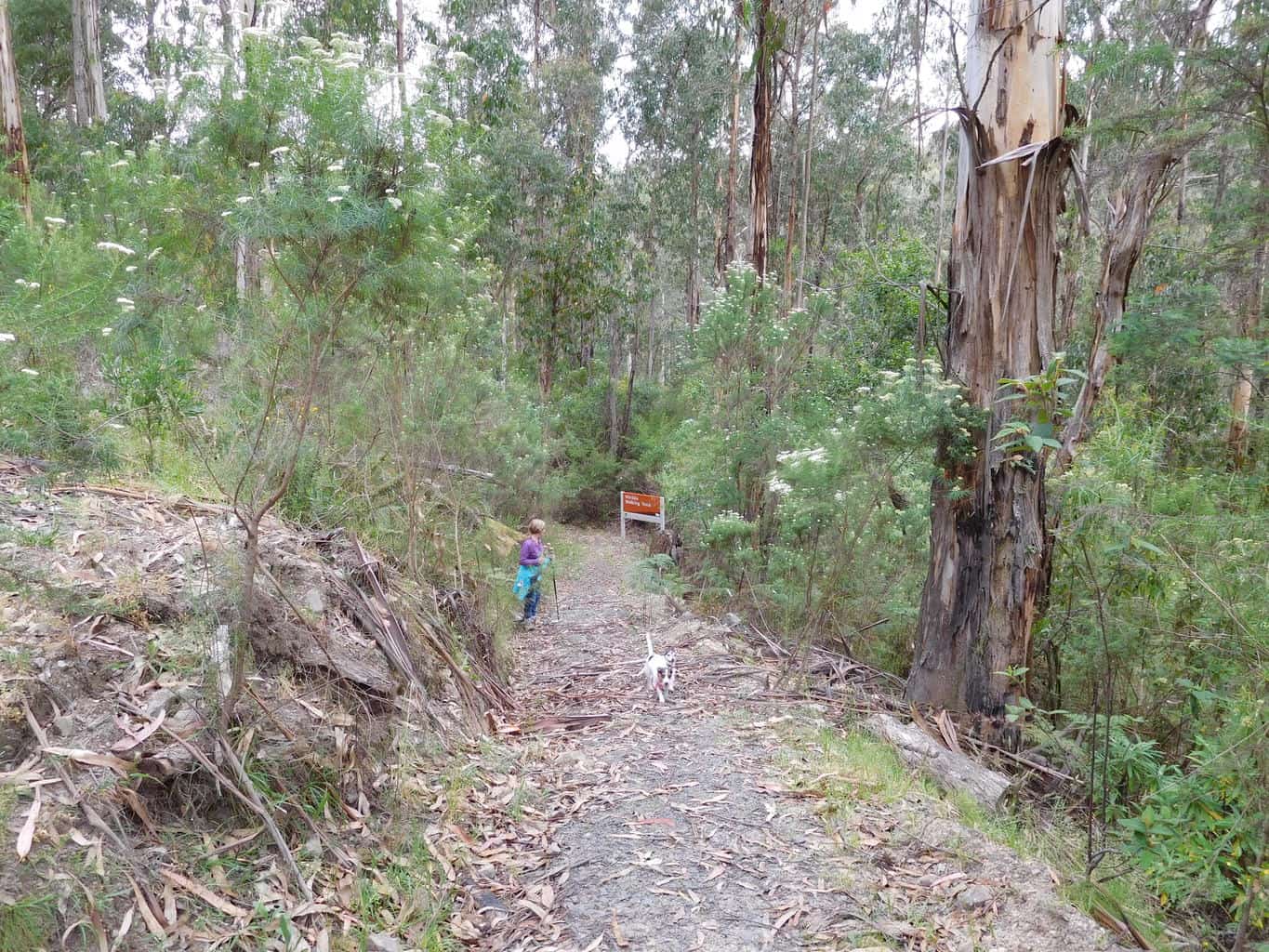 Moondarra end of the track within site of the railing of the bridge across the spillway. 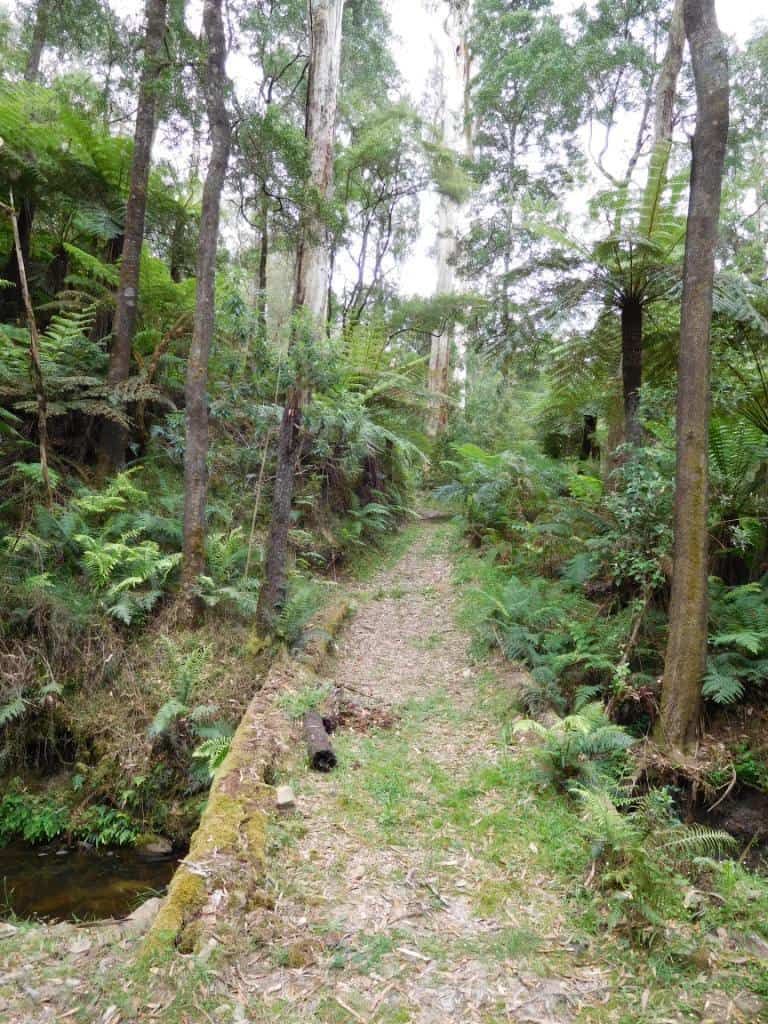 Mobile phone very patchy: will only work on some higher up sections, if any.