The quest for wide shoes: If life came with a user’s manual and we read it (unlikely – given how little we read other such manuals – else we would not have the acronym RTFM) we would probably give up much sooner. Now that I have slipped gracelessly into old age I am constantly coming across things which had they been in the manual would have filled me with trepidation if not despair. But enough of my woes!

Maybe it was because my left knee has been so worn out for so long and I was walking with such a pronounced and protracted limp but my right foot in particular seems to have been growing ever wider. This has been happening for a number of years. I used to wear size 8 UK Keen Targhees which were more than satisfactory when I posted about them here though I moved up from a Size 8UK to and 8.5UK because of toe problems encountered on the South Coast Track in 2014 walking out to Port Craig as I now recall.

After my knee replacement (back in February – it is now July) I found none of my shoes was wide enough for me at this size.  I could not pull my elastic sided Redback farm boots on anyway (because of the pain) so I bought a pair of zip-up Mongrel work boots which were wider (but heavier). 8.5 UK or 9.5US is the equivalent of a ‘double’E’ width, ie ‘2E’  ‘EE’. The next width up is ‘4E’ or  ‘EEEE’. The Mongrels must be roughly ‘4E’ – anyway the widest boot I could find which are readily available – and could try on (from a local Workwear supplier) .

As I said though they are whilst solid and recommended for farm/work use especially for their ease of donning an doffing,  too heavy for hunting/hiking. My Topos in 8.5UK have also become too narrow as have my Keens, so too my Redback farm boots – so I had a quandary…Get new feet too?

I have made what accommodations I can. For example I have taken the insoles out or cut them in half (since it is the toe end which is too narrow) – I seem to have become wider across the bridge (and it is bone to bone, so either it is the inter-digital spaces which have increased or my foot has actually grown wider).

I suspect this is something a really lot of people are going to encounter (as they age) if they have not done so already. I have also laced my shoes differently omitting the eyelets nearest the toe ends. All  these ‘dodges’ help somewhat, so you should try them first.

I have always had wide feet probably because I practically never wore shoes until I began working in heavy industry (metal refineries) when I left school around 15, some time ago now I admit. Not having been restricted by tight shoes I developed a pretty good grip on the planet which is coming back to bite me now since there is a dire shortage of wide (enough) shoes.

If you perform a search for ‘4E’ width shoes you will quickly see what I mean. Just about the only ones I found were the New Balance 510s which I bought a pair off (back in March/April or thereabouts as the problem emerged). They do not have a satisfactory tread pattern for slippery conditions and have (as many shoes do – I can’t imagine why) a hole in the centre of the heel where you are bound to spike yourself on a stick, stump or sharp rock (as I have done) if you venture off a concrete or similar track.

I was pretty much resigned to my ‘make-do’ solutions which were not quite giving me enough width (some cramps resulting) and a pretty hard strike on the ground due to the absence of any insoles when I happened to notice that Keen were offering my old favourite the Targhee 2s  in ‘Wide’. They were hard to source (whether this is because they are new/old I don’t know) but I finally managed to pick up a pair from Amazon, though they were very expensive – around A$200. 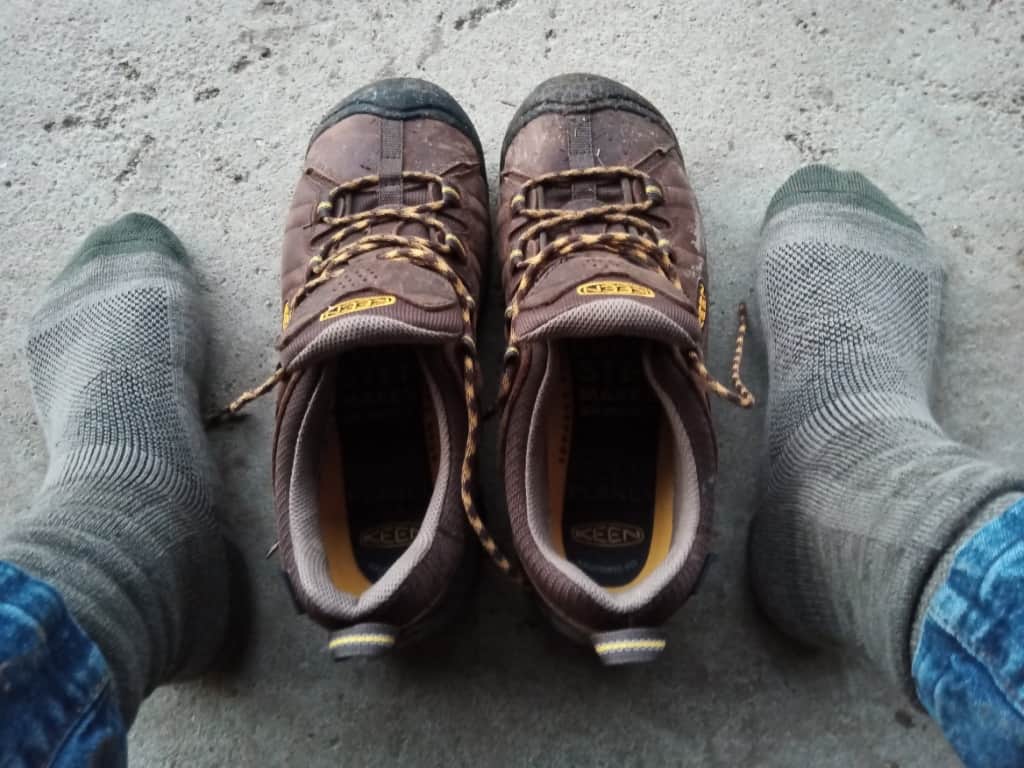 With just a little loosening of the laces at the front end they are working very nicely. I have been wearing them a lot for about a month and all my cramps have (at last) gone away.

I have had another couple of ‘owner’s manual’ issues which may help you also. My knee replacement had been healing and getting better enough by early May I thought I would try it out on a few days up the bush. as it turned out it wasn’t quite up to those rigours then but I can see it will be in future.

After I returned it was at first getting better again, then both my legs began to get much worse so that eventually I could barely shuffle or lift my feet, or balance. I also began to suffer from all sorts of aches and pains everywhere. I honestly thought I was headed for the tip!

Many thanks that I am not, and have recovered completely are down to ‘Dr Della’ who obviously cares for me far more than the ‘real doctors’ who it turned out had caused my woes. After I returned from the bush I started taking statins as the new doctor 1. Decided my cholesterol was too high (probably weight gain and inactivity due to the knee in reality and 2 That I should absolutely never take anti-inflammatories or Nurofen (pretty much on pain of death!)

Well, about ten days ago ‘Dr Della’ (ie my wife) correctly diagnosed that the near paralysis was in fact being caused by the statins and the symptoms rapidly disappeared starting within 24 hours of ceasing to take the wretched things.

Since that had worked so well I resumed my once per day Diclofenic (anti-inflammatory) and a couple of Nurofens (if needed) for pain. I am not exactly a new man – but much improved. I am at least looking forward to a bit of life again.

The sheep have now begun lambing and I am having no difficulty making my way around the hills to tag the lambs each morning. I have been able to double or triple the distance I walk each day. I now think it will be worth sewing up that new (lighter) tent I have been talking about (version #2 of the Grey Flyer – but this time in Olive) and Version #2 of my new DIY pack the first iteration of which which I am about to post about with a view to some forays up the bush as soon as the sheep have completed lambing (say mid August). I will order some materials from Ripsopbytheroll forthwith.