You should not be afraid to ‘have a go’. No manufacturer ever made the perfect pack (for you) but there is some chance you can do so yourself – at least it is worth a try. I have hauled this old pack around now for a number of years since Joe Valesko (at Zpacks) first made it for me over a decade ago. Back then he called it his ‘Blast’ pack, and it certainly has been for me.

Back then it was half cuben fibre but that wore through fairly quickly. I should not have been surprised really as it replaced an identical totally cuben fibre one I trashed pretty darned quickly which he replaced free of charge! The parts of the pack Joe made in 4.8 oz Dyneema have worn pretty well and we have replaced other bits with pretty much the same material. Della replaced the side and back pockets long ago which had been in a kind of mesh material quite unsuitable for blackberries and the like.

Again some time back I deleted the pad holder pockets and the ‘waist’ belt as you perhaps saw in this post. This made a substantial improvement but I still had the suspension wrong, and the shoulder straps had always been too narrow I felt.

Anyway it is Xmas and no-one is here (as usual). We always have Xmas on a different day as the kids have commitments elsewhere (work, other parents in law, etc), so I decided I would make new straps for it. I also changed their position again and the position of the waist belt.

I do have it right this time, so the lesson is you should persist. It is not right for Della who is shorter (and slimmer) but the width of the straps suits her too, so we have learned from the process.

Here is my pattern and cutting out of the shoulder strap pieces. 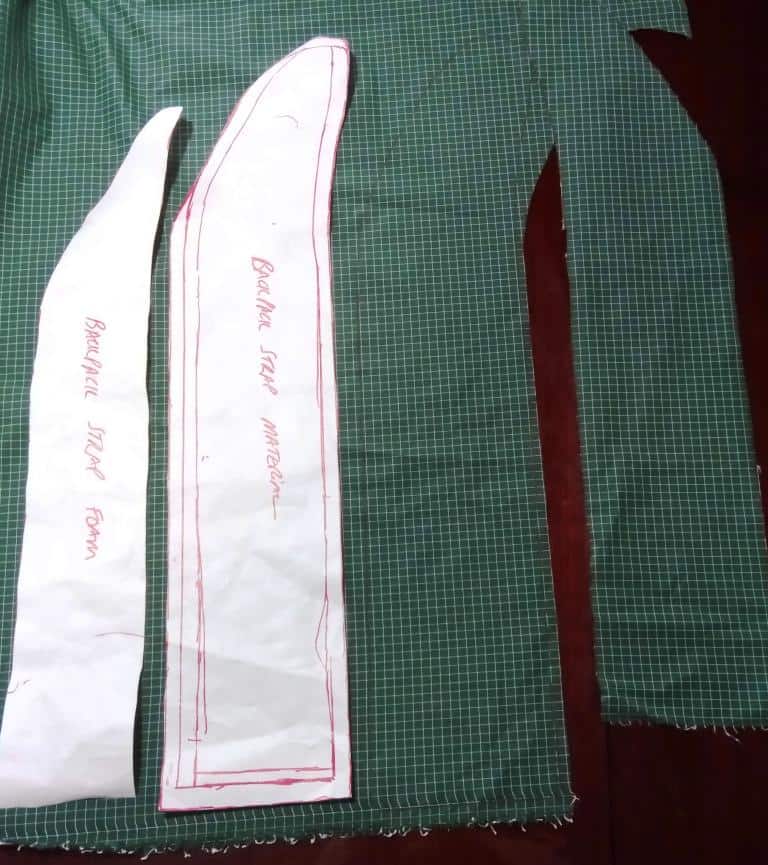 I should have taken lots more photos of the process. Sorry. Here is the finished pack with the old (narrow) straps alongside for comparison. My new ones are at least an inch wider and softer. The two shoulder pouches (which are nearly worn out (cuben!) attach to the two tie outs on the top of the straps. The chest strap attaches to the lower ones. 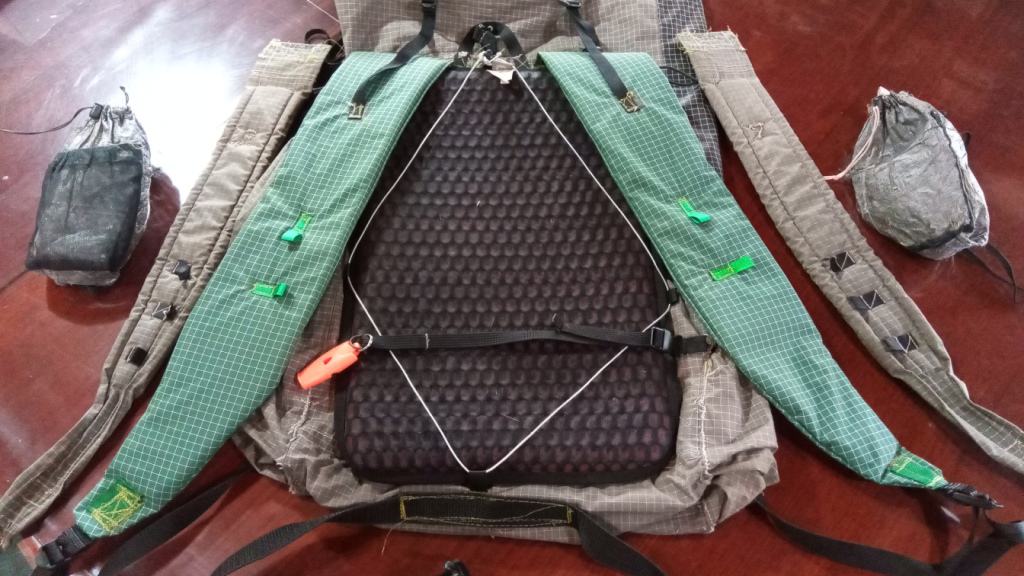 I have also learned that the shape of the pack (packs in general really) is quite wrong so I will be making a completely new pack from ‘scratch’ in he future which is a completely new shape but which incorporates what I have learned in my many modifications of this old pack – and the many modifications of various cheap packs which I have posted about from time to time.

To summarise: a pack should be (much) wider (in both directions) at the bottom than at the top. Most are straight up and down. Another important consideration is that the pack should curve to conform to the curve of your back. It should sit on your bottom. It should go into the ‘small’ of your back and then in again where your back goes in again at the shoulder.

Most packs are straight so that if you pull them into the small of your back they stick out too far at your shoulder. Some makers incorporate ‘load-lifters’ there to pull them back it. This helps somewhat but the overall effect is to attempt to straighten your back with the pack. This attempt to make you conform to the pack instead of the other way round is only going to give you a sore back, make you tired and make carrying the pack more of a chore.

Another thing: Made (entirely) out of 4.8 0z/yd2 Dyneema fabric a 60 litre pack ought not weigh any more than 400 grams (in fact slightly less) as mine does. If yours does, get out the  sewing machine! I like the green check like the new straps I made. I bought enough to make a couple of backpacks long ago but I haven’t managed top do so yet.

Here is a very rough sketch I did for Della just to illustrate how the pieces of the pack will conform to one’s body shape (you can measure yourself before you cut it out so it will be just right). You will need two side pieces and one piece that makes the front, back and bottom, then a rectangle for the extension collar and two other pieces for the two different shaped pockets (three altogether). 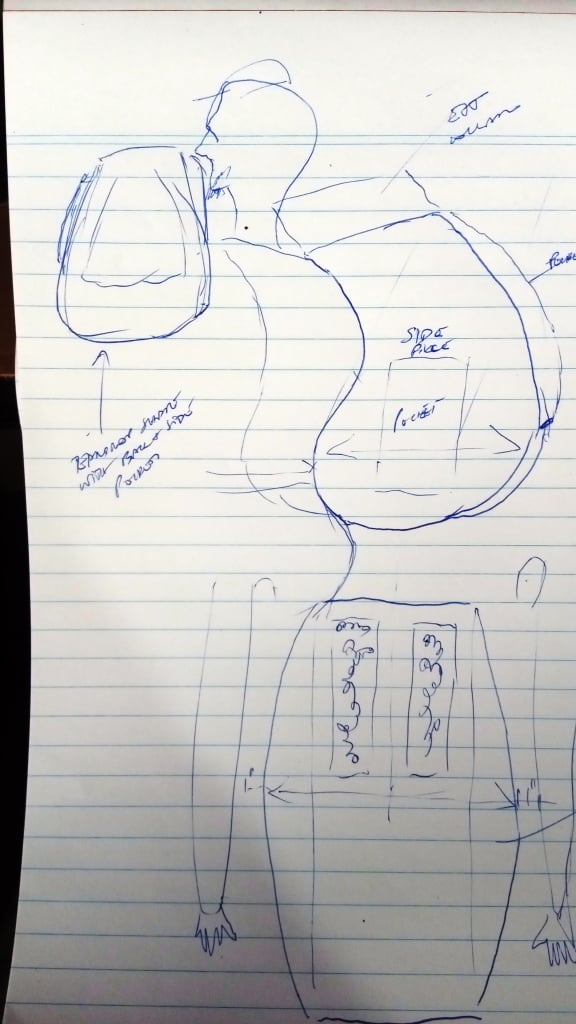 This (roughly) is the shape I want – without the weight (mine or its!): 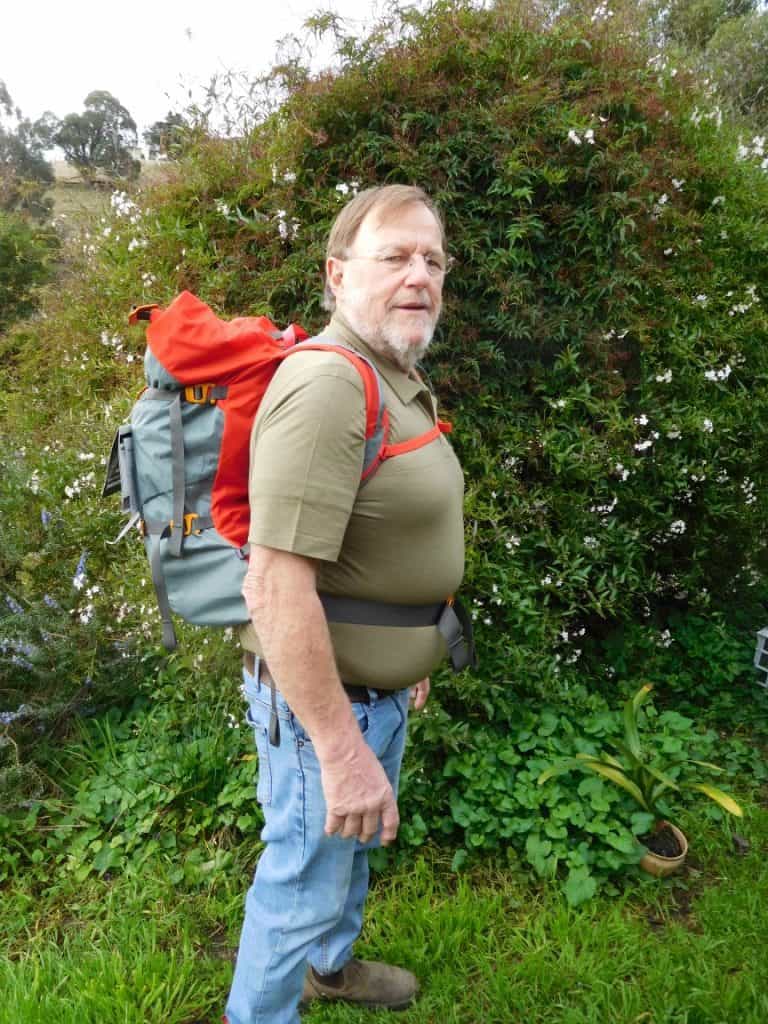